Two days of temperatures in the 70's (21 C) produced activity in the Fox Island County Park wetlands pond that I have never seen and may not see again for long time.  The pond was full of American Toads (Bufo Americanus) mating in a frenzy that was making the water churn as they pushed for contact with potential mates and called to advertise their availability to mate. 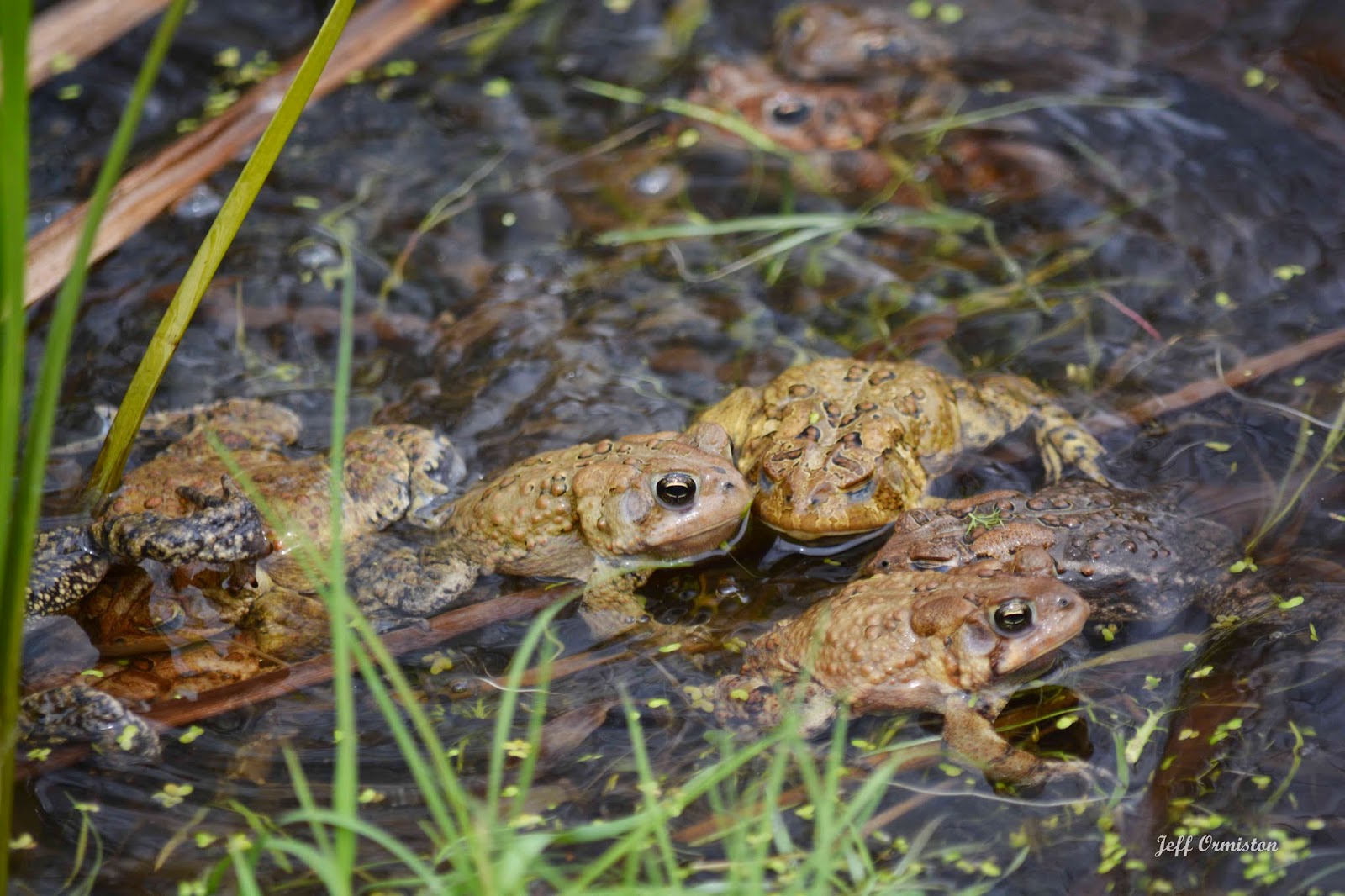 If you look closely you will count at least 9 toads in shallow water at the pond's edge looking for a mate.  Any movement sparked an interest by any toad in the immediate vicinity. These toads could have been picked up easily by hand as their flight reflex was numbed by their interest in carrying on the business of creating the next generation. 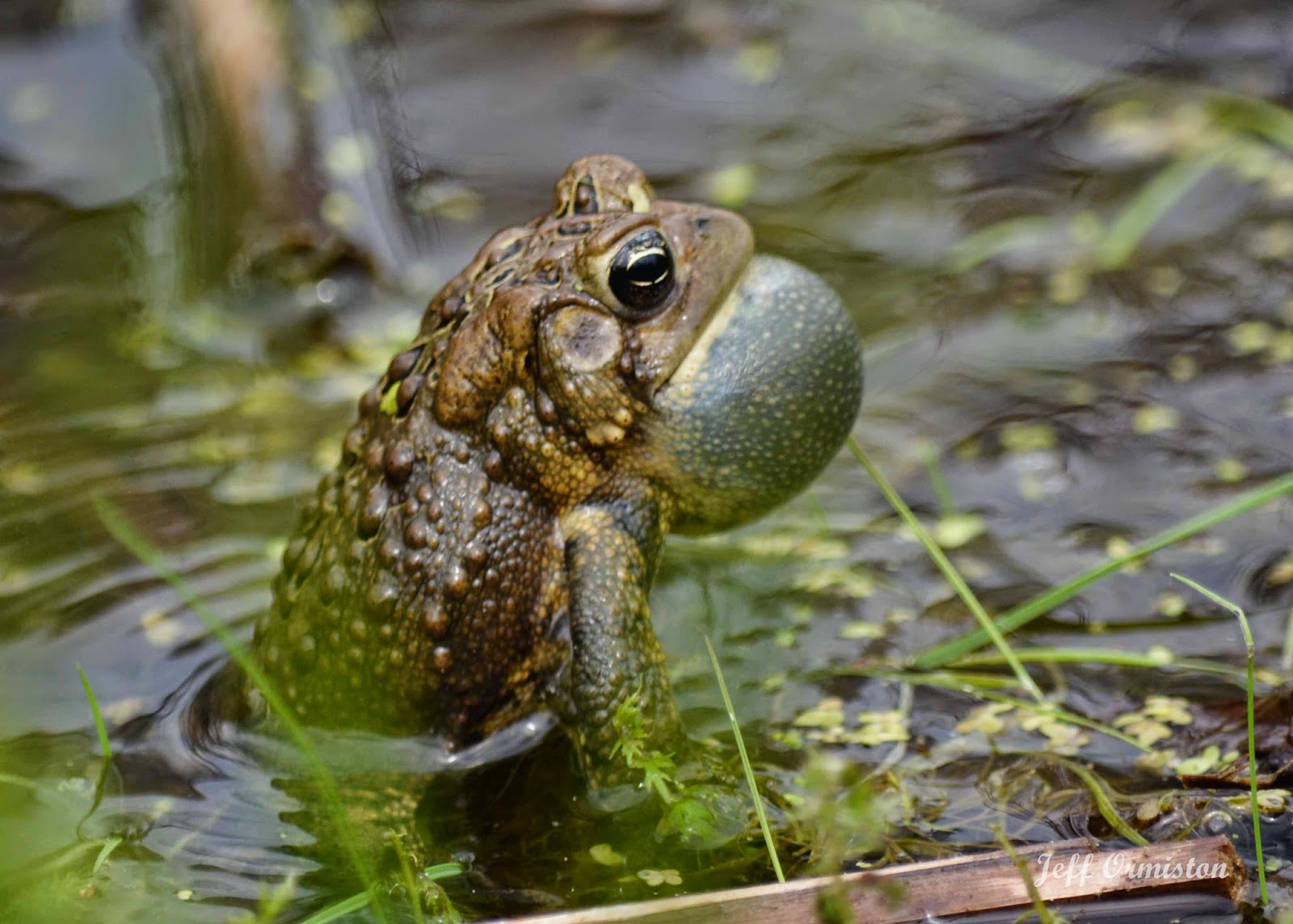 The male toads would sit upright to project their call or crouch down, half submerged, making the water ripple with their sharp singing. 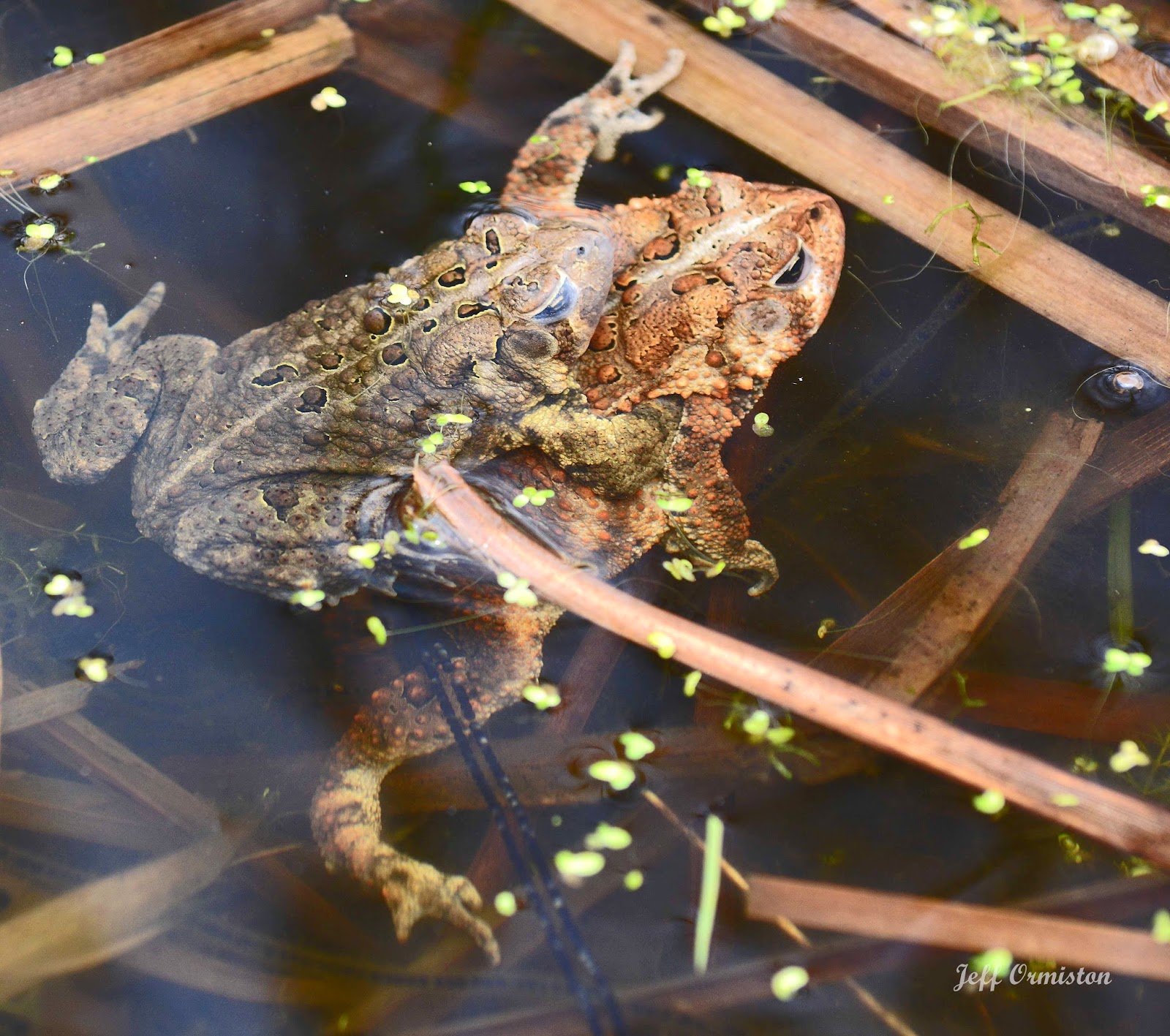 A successful pairing allows the smaller darker male (on top) to grab the larger female in a very rigorous hug called "amplexus" in which the male externally fertilizes the female's eggs as she releases the twin egg strands posteriorly.  The egg strands are visible just above the females right rear leg and were present all along the south-central shallows of the Nature Center Pond. 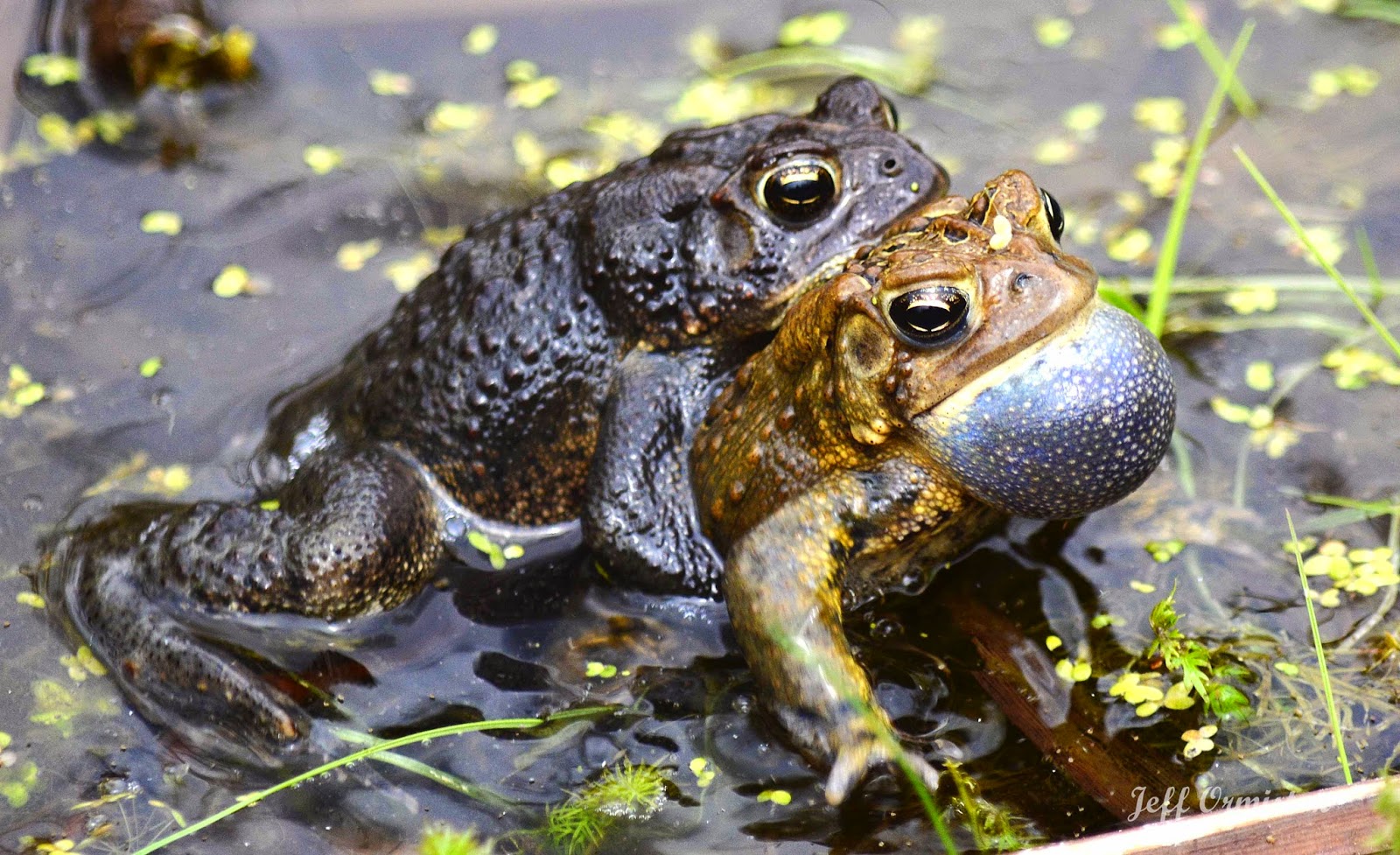 In the confusion and activity it is common that a calling male will be mounted by another competing male. This situation only lasts for a few seconds as reality quickly sets in.  When I put my hand near the water surface two or three toads would swim over to check out the movement. 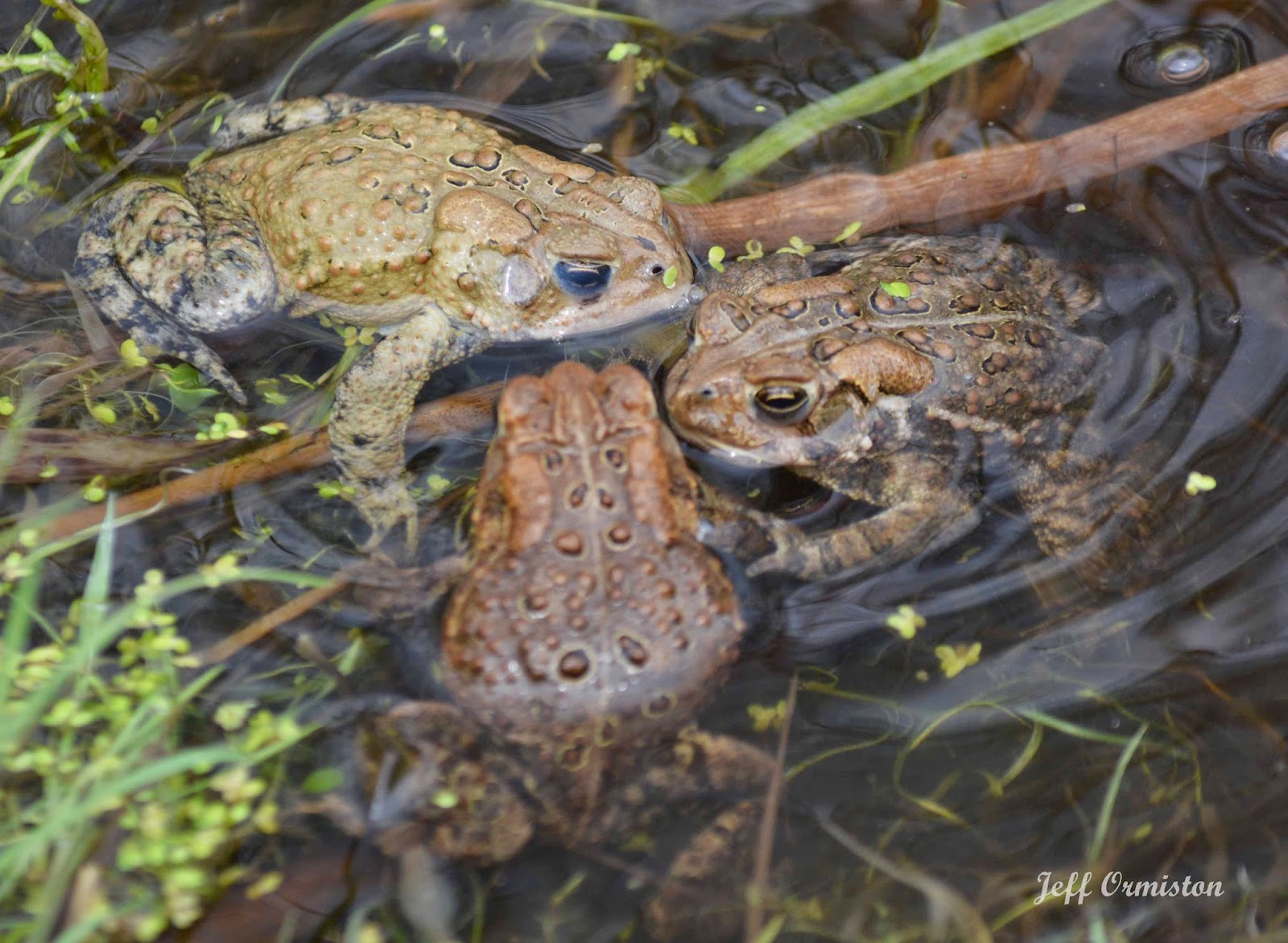 And quickly reconsidered
The high pitched singing of the toads was deafening, drowning out the occasional call of a chorus frog or the slow, low "creak" of the leopard frog.


Posted by Jeffrey Ormiston at 9:15 PM No comments: 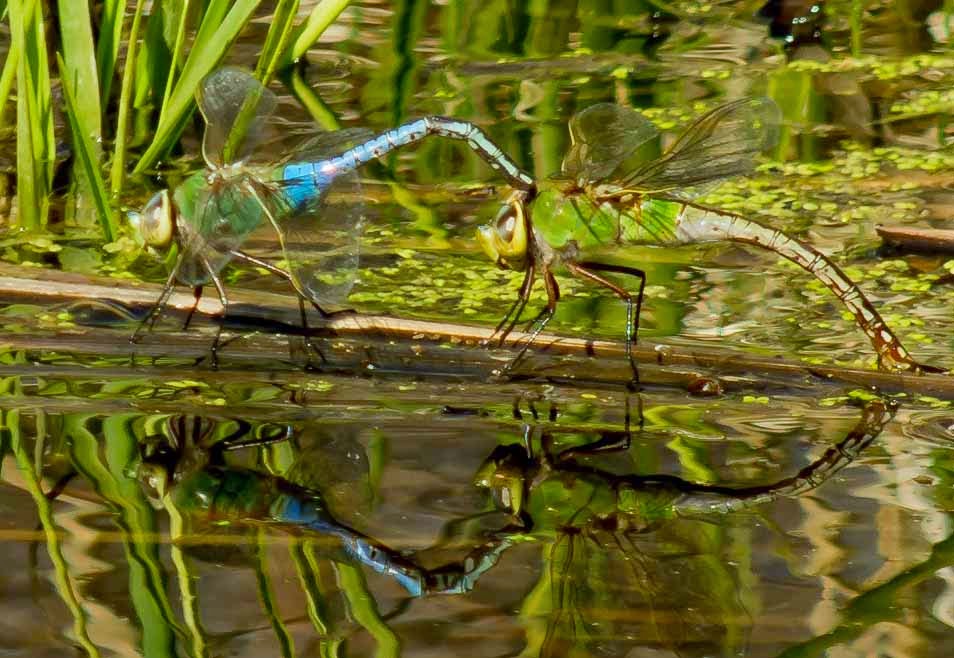 This Green Darner male has clasped the female just behind her head in the typical tandem position for odonata.  The male guards the female from competitive fertilization as she lays eggs on verticle and horizontal stems and twigs. 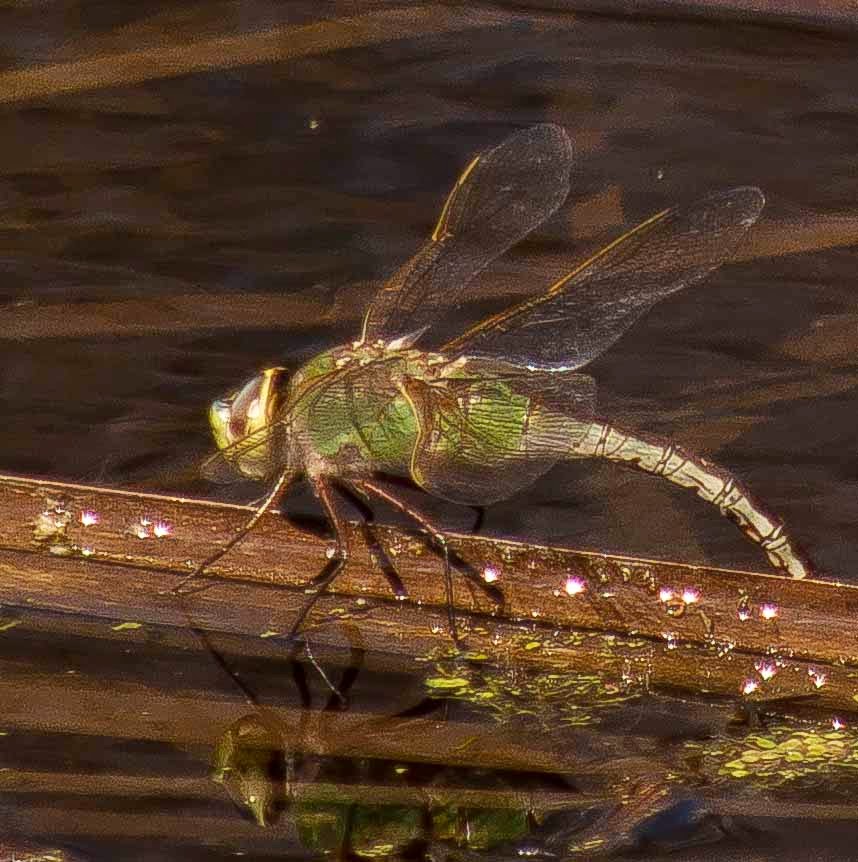 Many times females will lay eggs solo like this darner laying eggs on a floating stem
Posted by Jeffrey Ormiston at 9:00 PM 1 comment:

The Spreadwing Damselflies are easily mistaken for dragonflies because of the open position of their wings when perched.  The Spotted Damsel is a late season flyer along with Meadowhawk Dragonflies.
Photo by J. Ormiston
Posted by Jeffrey Ormiston at 7:25 PM 1 comment:

For about a year and a half I have been trying to get a photograph of dragonflies mating.  This past week as I was on a short walk at the Fox Island Nature Center Wetlands a mating pair of Blue Faced Meadowhawks (Sympetrum ambiguum) landed only five feet away. 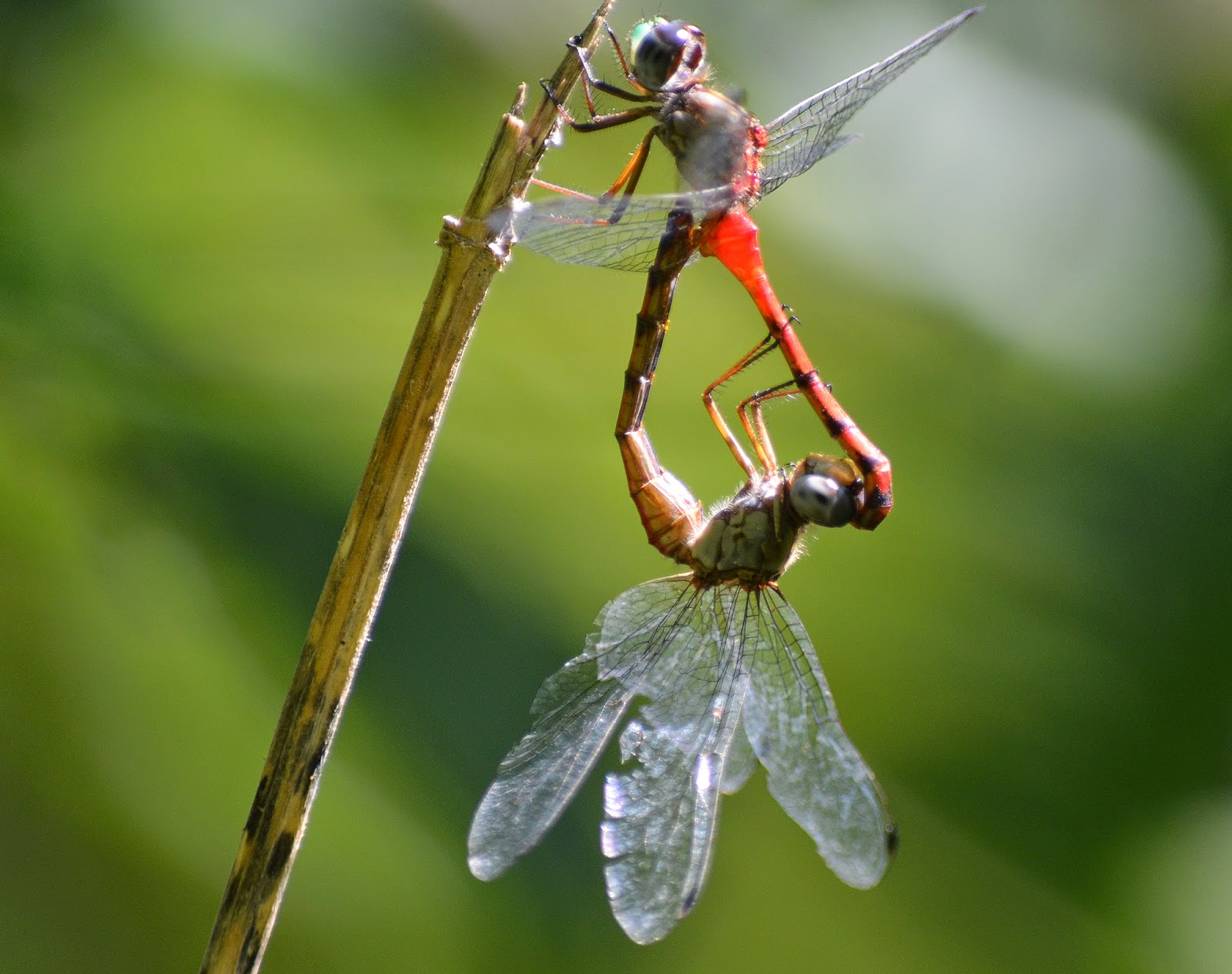 In this "wheel position" the male (red abdomen) grasps the female just behind the head and the female curls her abdomen to bring it in contact with the male so sperm can be transferred to the female.  The tattered wings of this female shows she has had an active summer 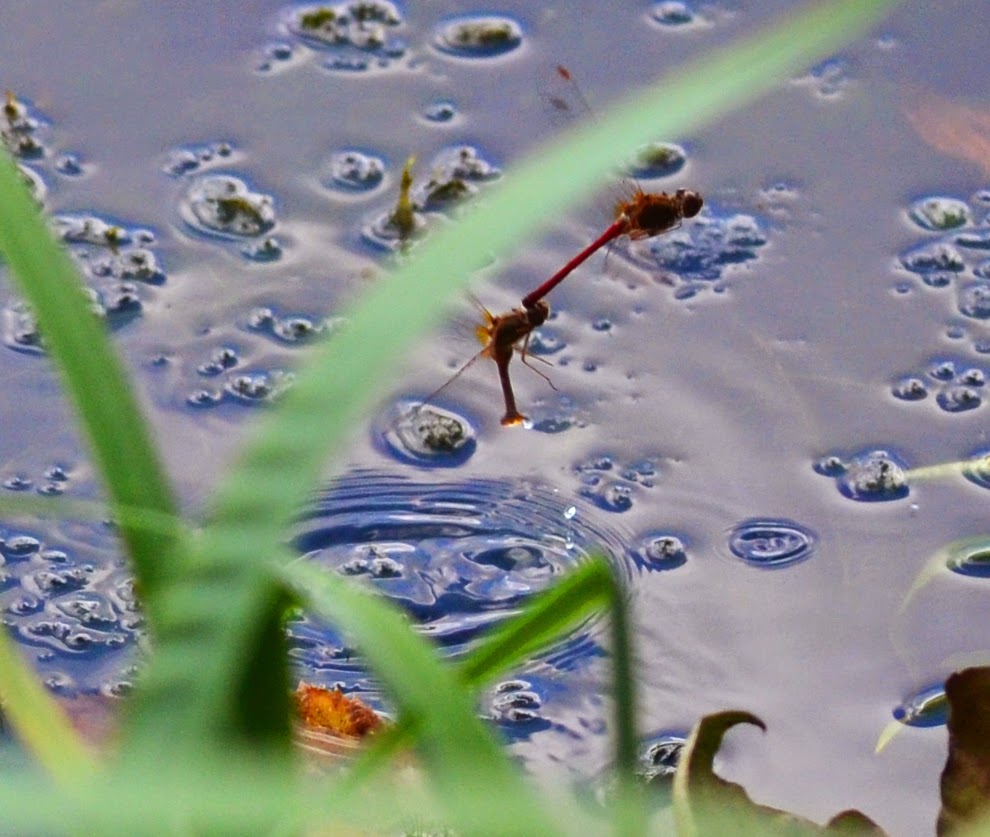 This pair of Meadowhawks are in the "Guarding Position" as the male grasps the female just behind the head and they fly in tandem as the female lays eggs across the top of the water. In this position the male is guarding against the female being inseminated by another male.  Male dragonflies have the ability to remove the sperm of a previous mating from a female before depositing their own.
Photos by J. Ormiston
Posted by Jeffrey Ormiston at 8:00 PM 1 comment:


This female Bull Frog warms in a small pond covered by Duckweed and Watermeal. Both plants are free floating plants commonly growing on small still water ponds.  Duckweed is the worlds smallest flowering plant and Watermeal is the worlds smallest seed producing plant.  These two plants can can grow so densely that they can lead to oxygen depletion of a pond and fish kill.
Posted by Jeffrey Ormiston at 7:28 PM 1 comment:

First appearing more 100 million years before the dinosaurs, DRAGONFLIES are a marvel of adaptation.  Surviving ice ages and  mass extinctions they are the animal kingdom's premier aerial predators. There are 97 species identified in Indiana and 462 species in North America


We recently had a large group of 5-6 year old students come to Fox Island Park for a field trip.  On of the stops during their visit was at Bowman Lake to participate in using nets to dip for aquatic life including various water dwelling insects.

One young man retrieved a darner nymph (dragonfly) and was very excited to share it with his classmates.  I asked him to put it in the holding pan and continue to dip with the net.  Ten minutes later, when I looked in the pan, the adult dragonfly had started to emerge from it's exoskeleton. 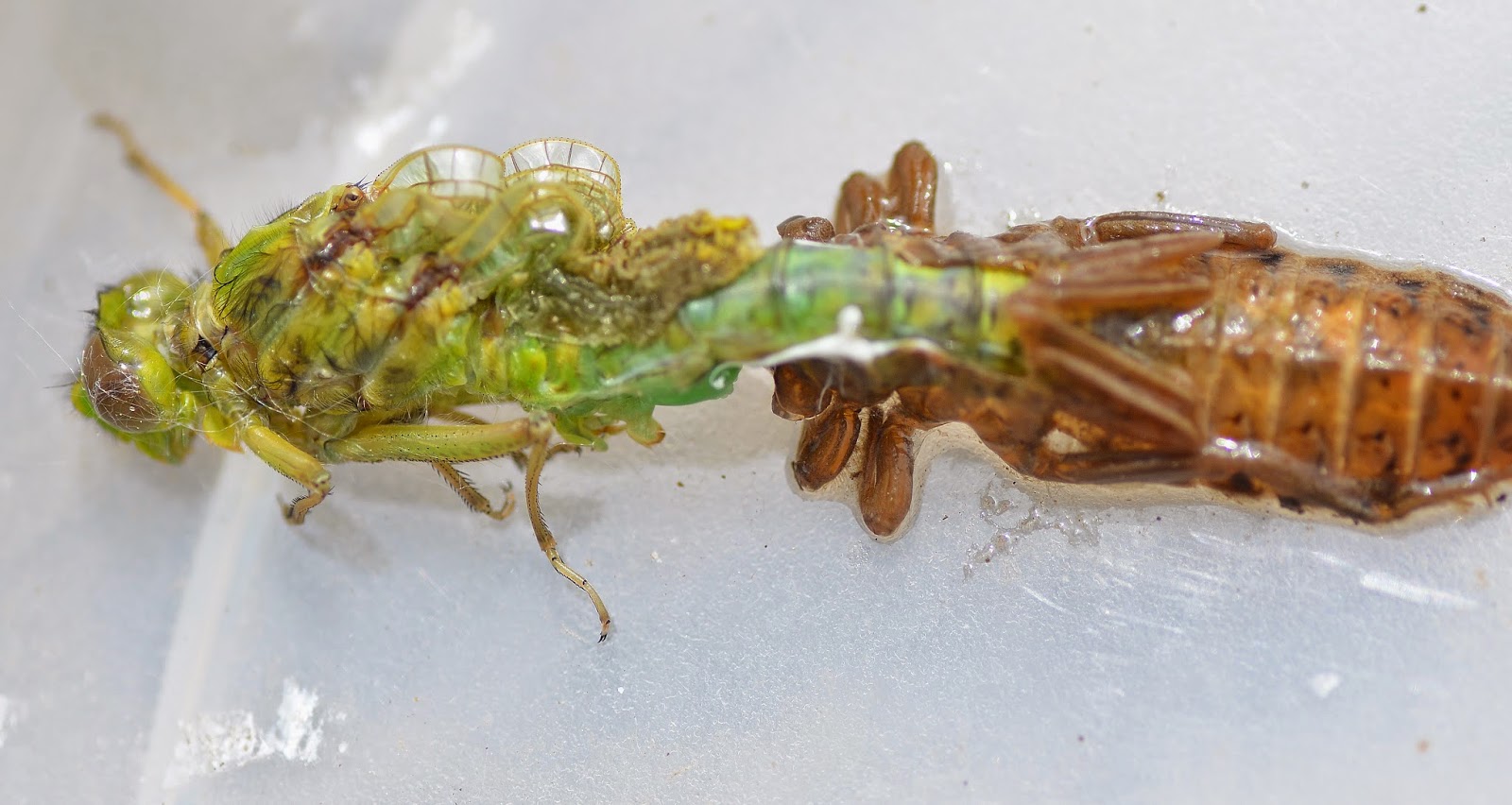 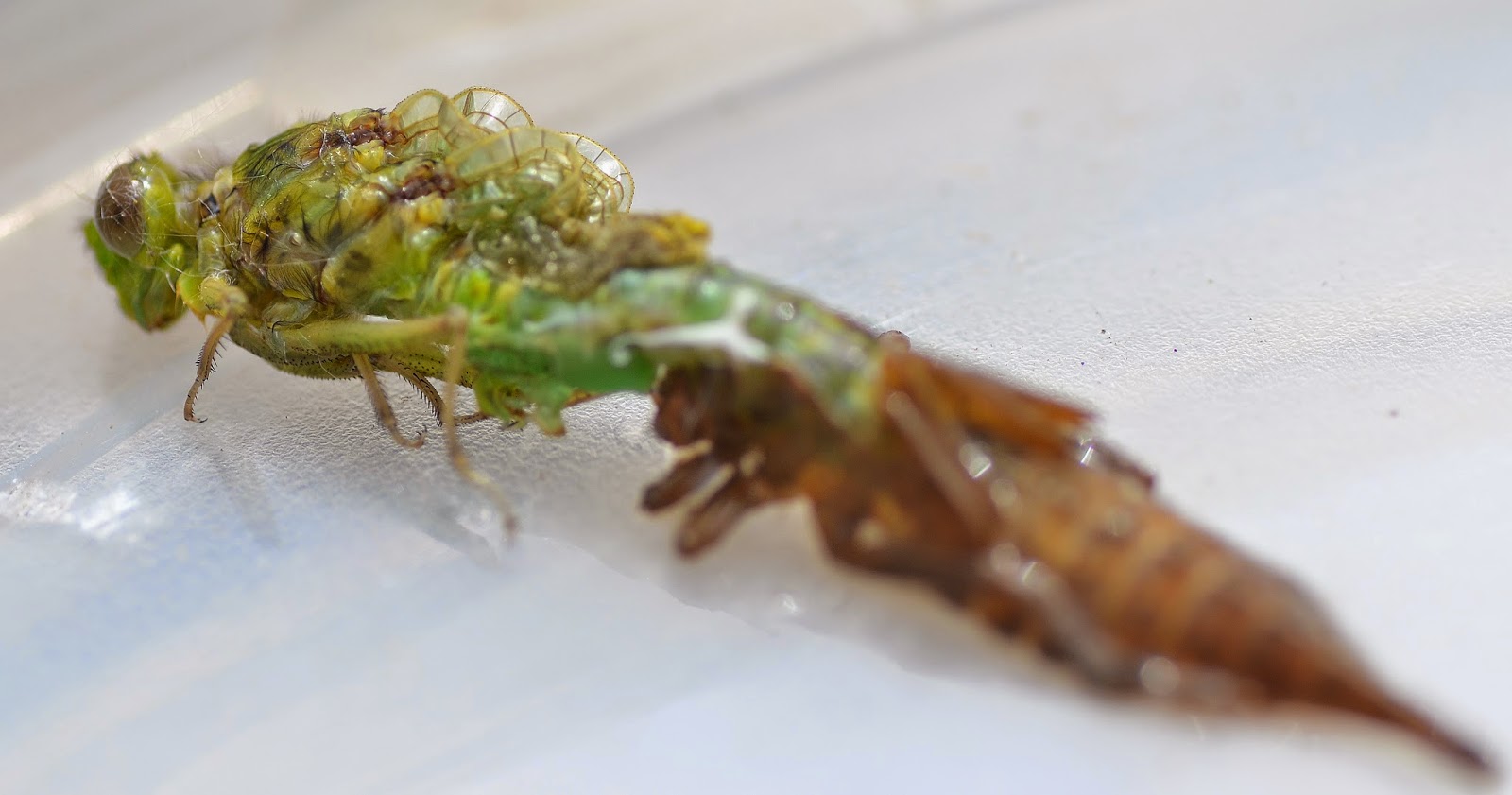 Over the next 45 minutes the students and adults watched as the adult Green Darner slowly crawled out of it's skin.  The new adult was left clinging to a lakeside bush to finish it's transformation to a flight capable mosquito eater.
Photos: J. Ormiston
Posted by Jeffrey Ormiston at 8:16 PM No comments: